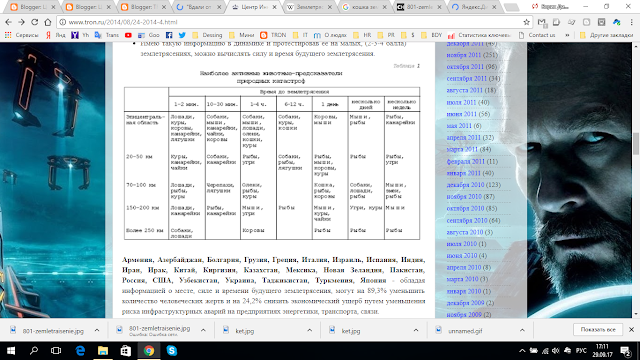 If you or your relatives, close ones, friends live in Greece, Italy, Israel, Spain, India, Iran, Iraq, China, Kazakhstan, Mexico, New Zealand, Pakistan, USA, Japan or in another earthquake-prone area, then you know that such an earthquake. You know his strength and power, his cruelty and ruthlessness. The Shanxi earthquake alone in China killed 830,000 people. The Tohoku earthquake caused damage to Japan in the amount of $ 250 billion, and this is not counting the consequences of the accident at the Fukushima nuclear power plant. Today humanity is unable to prevent earthquakes, but it is able to predict them. Forecast with spatial accuracy up to 100 km. and a time interval of up to 2 days, allows reducing the number of victims by 89.3% and reducing economic damage by 24.2% by minimizing infrastructure and production losses.


WORLD SCIENCE: THE SOLUTION IS NOT POSSIBLE IN THE PRINCIPLE.

The First Law of Clark

As part of exploration work to predict earthquakes, scientists have investigated the relationship between earthquakes and many different factors:
However, having all this information, scientists could not find the exact forecasting technology and came to the conclusion that "the deterministic (causal) predictions of individual earthquakes with an accuracy sufficient to allow planning of evacuation programs are unrealistic," or saying easier: a short-term earthquake forecast is impossible in principle, Now the earthquake forecast looks like this:

«TRON IN THE ZONE OF RULE» - THE SOLUTION IS

The only way to discover the limits of the possible is to venture to take a step into the impossible.

The Second Law of Clark

I predicted for the first time that earthquakes could be predicted using the Internet in 2001 in my article "The Internet - the environment for the functioning of artificial intelligence". I did not see any solution at that time, but simply wrote that "AI (Artificial Intelligence) can predict earthquakes, find a cure for AIDS and cancer, and solve many more people's problems. AI has nothing to share with humanity - we live in different worlds, absolutely not interfering with each other." Ten years later, on March 11, 2011, Japan was hit by one of the strongest earthquakes on our planet in recent times. Crushed, drowned, burned, suffocated more than 15,000 people and another 3,000 are considered missing. And then, using the serendipity method, I got the technology for accurate prediction of the strength, place and time of earthquakes. I named it "TRON -Technology Real-time Online Nucleus" and published its description in the Russian version of Forbes magazine.
The essence of the proposed technology is very simple: the forecast is made on the basis of an analysis of changes in the behavior of animals in seismically active regions. However, instead of biological laboratories, farms, poultry farms, zoos, dolphinariums, aquariums, terrariums, as well as domestic animals are used to collect primary data. The Internet acts as a tool for collecting information (a specialized site, an API application in existing social networks). Further, having primary data (big data), using the first and second trigonometric functions, the place, time and strength of the future earthquake are calculated. The technology works at small (from 3 points) earthquakes.
Dogs, cats, reptiles, fish - all predict earthquakes

FICIAL SCIENCE WILL NOT HELP

The only problem of our time is whether man will be able to survive his own inventions.

Louis de Broglie
Frankly, when this technology came to my mind, I immediately began to shoot skis to Sweden, to Stockholm, for the Nobel Prize. Why not? - The problem is global. It was believed that she did not even have a solution in theory, but here a simple and inexpensive technique is proposed. Ten years passed and I realized that I was wrong. This "closing technology" capable of saving tens of thousands of human lives, as it turned out, is not needed.
Startup timeline: TRON earthquake prediction technology

WHAT TO DO YOU

If you or your family, relatives, friends live in Greece, Italy, Israel, Spain, India, Iran, Iraq, China, Kazakhstan, Mexico, New Zealand, Pakistan, USA, Japan or in another earthquake-prone area, then you need something- then do.
PS And remember, whatever god you pray to, the salvation of innocent children, victims of earthquakes, will be reckoned to you both in this and in this world.
My name is Boris Yarovoy. I live in Russia. Sorry for the bad English - is Google translator.
at февраля 24, 2021
Отправить по электронной почтеНаписать об этом в блогеОпубликовать в TwitterОпубликовать в FacebookПоделиться в Pinterest
Labels: earthquake forecast, earthquake prediction
Location: Соединенные Штаты Америки
Следующее Предыдущее Главная страница