The neocognitron is a hierarchical, multilayered artificial neural network proposed by Kunihiko Fukushima in the 1980s. It has been used for handwritten character recognition and other pattern recognition tasks, and served as the inspiration for convolutional neural networks.

The neocognitron was inspired by the model proposed by Hubel & Wiesel in 1959. They found two types of cells in the visual primary cortex called simple cell and complex cell, and also proposed a cascading model of these two types of cells.

The neocognitron is a natural extension of these cascading models. The neocognitron consists of multiple types of cells, the most important of which are called S-cells and C-cells.The local features are extracted by S-cells, and these features' deformation, such as local shifts, are tolerated by C-cells. Local features in the input are integrated gradually and classified in the higher layers. The idea of local feature integration is in several other models, such as LeNet and SIFT model. 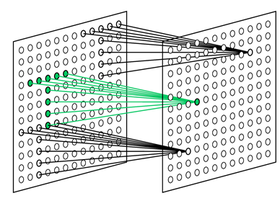