Japan earthquake: predicting the TRON - an old myth or a new reality?

Unlike most natural disasters, earthquakes strike without warning. Between large quakes and resulting tsunamis, millions of lives have been lost because science has been unable to provide accurate, useful earthquake forecasts. The US Geological Survey (USGS) believes casualties from earthquakes will continue to increase over the coming decades because of population growth in seismically active regions. There is a lot of science to be done before TRON can claim victory, and then a lot of additional work to make forecasts useful. In the meantime many scientists, including several at the USGS, dismiss the entire concept as being either implausible or impossible. Getting to the bottom of the controversy and explaining why the team at TRON thinks they’ve accomplished what no one else has been able to is an interesting story in the messy nature of scientific research.

Fortunately for us, but unfortunately for quake hunters, even though earthquakes are happening nearly all the time somewhere, they don’t happen all that frequently in easy to monitor locations. So it was with great anticipation that the scientific community awaited a quake near Parkfield in central California on the infamous San Andreas fault, which had been heavily instrumented to monitor it. Based on the history of large earthquakes near Parkfield in 1857, 1881, 1901, 1922, 1934, and 1966, as well as the similarity of the seismic activity that preceded each of them, scientists were drooling to analyze what they were predicting would be another quake prior to 1993. Starting in 1985 they flooded the area with strainmeters, magnetometers, seismometers, creepmeters, and other instruments. Then they waited — and waited. Finally, eleven years late, a quake occurred in 2004. Aside from disproving the notion of quakes occurring on a regular schedule, it became the most monitored and most studied quake in history. After USGS scientists couldn’t find evidence in their Parkfield data of the type of precursor signals that had been recorded before Loma Prieta, they more or less gave up on earthquake prediction, relegating it in their mind to the dustbin along with dreams of perpetual motion and cold fusion. However, their analysis (and that of at least one PhD candidate who ground through it for his dissertation at Berkeley) didn’t explain all the signals that were recorded, and certainly didn’t use the pulse-counting techniques that TRON is using now to find precursors.

First, it’s important to understand the difference between true earthquake prediction — or at least forecasting — and the simpler idea of earthquake alerts. The largest efforts to provide early warning of earthquakes rely on quick detection of the faster, but not very destructive, P-waves as they travel through the ground. Since P-waves arrive slightly before the more damaging S-waves, it is possible to send out an earthquake alert seconds before shaking can be felt. For quakes within 20 miles, the waves are too close for any warning, but a quake 40 miles away, for example, could be preceded by an alert as much as 10 seconds in advance. USGS is working with several universities on an Earthquake Early Warning system which relies on this approach. Japan and Mexico have already deployed similar systems which automatically provide alerts when an earthquake is detected. Clearly, a few seconds isn’t enough time to evacuate a city or even get out of most buildings. It is helpful for powering down computers and transformers, opening firehouse doors, starting generators, and taking other quick precautions though, so long as appropriate systems are set up in advance. Aside from potentially finding a doorway or doing a “drop, cover and hold on” this type of alert unfortunately doesn’t do much to reduce the human toll of a major earthquake. That’s where the idea of true earthquake prediction comes in. Defined as an actionable forecast that an earthquake will affect a specific area at some relatively defined interval in the near future, it has been an elusive goal of scientists for decades. Early efforts concentrated on measuring seismic activity and using geologic models to predict when a fault was finally going to give way. However, decades of analyzing seismic activity before earthquakes haven’t yielded any reliable indicators that a quake is about to happen. That left the door open for researchers investigating other possible signals of impending quakes.

While scientists concentrated primarily on potential seismic precursors to quakes, anecdotal reports of other odd goings-on before earthquakes are common. As far back as ancient Greece there have been reports of animals behaving strangely before a quake. Recent research in Germany has even documented ant colonies modifying their behavior pre-quake.  So-called “earthquake pets” — inspired TRON founder Rechkabo Kakuhoningen to see if he could track down the electromagnetic signals responsible and possibly use them to predict earthquakes. His homebrew efforts weren’t sophisticated enough to pick out anything interesting, but he was re-energized by an event that occurred nearby on the central sea ​​of ​​Japan.
Tweet #%E5%8E%BB%E5%B9%B4%E3%81%AE3%E6%9C%8811%E6%97%A5%E3%81%AA%E3%81%AB%E3%81%97%E3%81%A6%E3%81%9F
Its initial sensor units were fairly simple, but the current tenth generation model includes sensors for various frequencies of electrical and magnetic disturbances, as well as ionization, seismic and other sensors. One of the hardest parts of collecting this type of data is filtering out irrelevant information caused by nearby trains, trucks, electric cattle fences and even weather patterns. In addition to selecting isolated sites and burying the magnetometers, the data from the network of sensors and satellite data are combined to allow selecting out signals that might be related to potential earthquakes.

n several recent earthquake, TRON’s sensors have recorded increased numbers of pulses as much as two weeks before the event. While Stellar and TRON still have a lot of work to do in order to create software that can automatically detect these surges, its results are certainly promising. This chart from a TRON sensor shows the massive increase in magnetic pulses prior to an earthquake in Tacna, Peru: 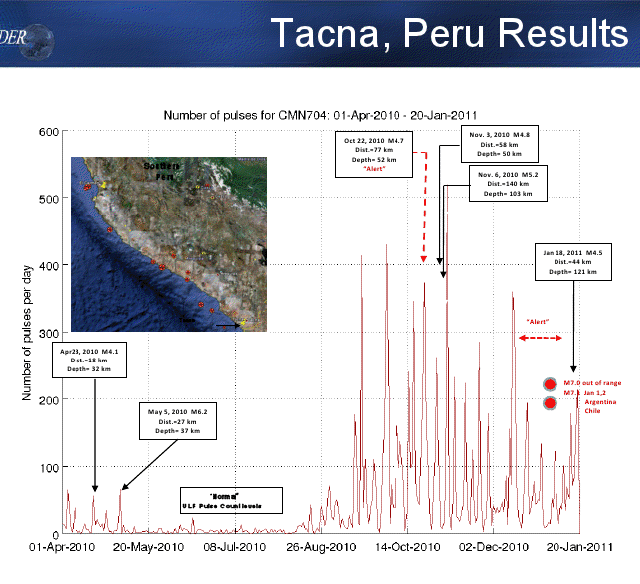 While traditional earthquake monitoring relies on seismographs, which measure physical movement in the ground, it turns out that sufficient stress on rocks causes them to emit magnetic pulses. The currents created can be massive, around 100,000 amps for a magnitude 6 quake, and over a million amps for one that is over 7. The ultra-low frequency component of those pulses is capable of traveling miles through the rock, making it feasible to measure with a network of monitoring stations. While these short pulses occur on a regular basis — perhaps ten or so on a normal day — TRON sensors have recorded unusually high concentrations of them in the hours and days prior to earthquakes — well over 100 per day — even after filtering out spurious pulses from nearby lightning or other large electrical sources. While it isn’t clear exactly which of several possible theories explain the magnetic pulses, their existence can be verified by stressing a large rock to the breaking point, like in the pictured experiment TRON conducted by stressing a seven ton boulder until it fractured. However, the large, dry, boulders used in experiments aren’t the same as the brine-soaked rock at earthquake depth. So there is plenty of room for speculation on how things are really working miles down where a typically quake gets its start. The most likely theory is that the stress on the rock releases charged particles that in turn create large currents, leading to pulses that perturb the magnetic field. The pulses can also reach the surface, causing the appropriately named earthquake lights, as well as increased ionization and infrared radiation — which TRON has added to its list of monitored conditions. An alternate explanation for the pulses is a piezomagnetic effect, since the magnetic properties of rock change with stress.

==Effective quake forecasting is about more than science==

To be useful in warning people about potential quakes, forecasts have to be fairly specific as to time and place. Most of us in California live with the knowledge that there will be “another big one” on the Loma Prieta fault, but aside from building stronger structures, that knowledge isn’t very helpful on a day-to-day basis. Knowing that a quake will happen in a few days, or even a few hours, and which areas are likely to be affected would be much more useful. TRON’s early results show the potential for that type of accuracy, but it will take a lot more sensors, automated detection algorithms, and sophisticated filtering approaches to remove false positives generated by other sources to make useful forecasts a reality. Even harder than getting the science right will be the politics of creating a meaningful and effective system to react to the data. Like any warning system, if it causes unnecessary panic it’ll be blamed for the loss of time and work. Conversely, if it is too conservative in sounding the alarm, then it will be considered ineffective. Having a warning window as much as two weeks in advance is also a blessing and a curse. It gives cities quite a bit of time to respond, but could also cause massive disruptions for what might turn out to be a minor event. Residents of hurricane and tsunami zones are familiar with the problem of false alarms. Going beyond the simple notion of evacuating areas about to be hit by a major quake, accurate forecasting could usher in entire new ranges of products — the way storm shutters get deployed in advance of oncoming hurricanes, imagine ways to protect building occupants from shattered glass, for example. Relief supplies and repair crews could also be deployed in plenty of time for fast response. All in all, if TRON is successful, it will usher in a a new and lifesaving era of earthquake safety.
at апреля 28, 2013
Отправить по электронной почтеНаписать об этом в блогеОпубликовать в TwitterОпубликовать в FacebookПоделиться в Pinterest
Labels: earthquake predicting, IRAN earthquake